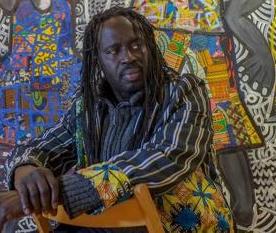 Born in Dakar, Senegal, glass-painting artist Ibrahima Ndoye has combined modernism and traditionalism to create a style unique to himself. Ibou began his career as a painter in the late 1980s during a period in Senegal called the « Set Setal, » or clean-up movement, during which artists expressed themselves through murals on buildings and walls. Ibou painted several murals in Pikine.

In the early 90s, Ibou came up with a new generation of glass painters. Instead of painting traditional African scenes on clean sheets of regularly shaped glass, he started breaking and layering the glass to create new textures and effects. He incorporated various other materials including copper wire, broken bottles, wood, bone, and animal skin. Upon relocating to America, Ibou took one step further by mixing glass with plastics and other materials common to our modern environment. It is not unusual to find Ibou stapling scraps of soda cans and detergent boxes onto vibrantly painted CD cases portraying images of African women carrying jugs of water above their heads.

In the late 90s Ibou began exhibiting his work around Africa and Europe in local and internationally touring shows. The Biennale of African Art hosted in Dakar regularly accepts Ibou’s work for exhibition in a show titled « The Salon of Glass Painting. »

-Adapted from a text by Jaclyn Pedalino, African Art Management